“The future belongs to you. What do you want it to look like?” This question was posed to young people across the UK as part of the Creative Earth Art Competition, and we’re delighted to announce that Yumna (Year 8) impressed the judging panel with her beautiful entry and was selected as one of the five winners.

Run by COP26, the competition saw over 5,000 participants utilising their imaginations and artistic skills to share their visions for the future of our planet. Yumna was selected as the winner of the 9-12 category and, as such, her artwork will be displayed for world leaders at the upcoming COP26 Summit in Glasgow.

“Our panel of judges – Geri Horner, Cel Spellman, Simon Reeve, Muriel Gray, Alfie Bowen and COP26 President Alok Sharma – had a tough decision on their hands. They received thousands of entries from young people across the UK but they were particularly impressed and inspired by your entry because of how detailed it was and how many different things you were able to show, from animals in their habitats and people coming together to all of the different leaves around the outside.”

As a result of her achievement, Yumna was also invited to appear on Sky News Live where she talked about her participation in the competition and what inspired her to enter.

Congratulations on this exceptional achievement, Yumna. 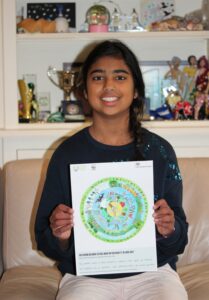 Fundraising for the Little Princess Trust