At A Level, OHS is the most consistently successful girls’ school in Oxfordshire.

UCAS statistics furthermore suggest that our girls are twice as likely to receive a Cambridge offer as students from the leading girls’ schools nationwide, confirming our status as the most consistently successful girls’ school in Oxfordshire. 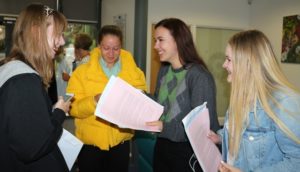 Pictured here is Chloe Troughear, an HSBC Scholar at OHS who joined us in the Sixth Form from Cherwell School and who is celebrating her 18th birthday today. Chloe is now heading to Birmingham to study Politics with an A* in Politics amongst her brilliant results.

“I am delighted for and proud of every one of our Year 13. I have no doubt these young women are set to change the world with their ambitions which range from Natural Sciences at Cambridge to Archaeology at UCL. What I have found particularly interesting is the sheer volume of girls studying languages at a time when, sadly, so many schools particularly in the state sector are having to cut back on language teaching. 25% of our Year 13 at OHS took a language A Level and 14% are now heading to university for Modern Languages degrees. A handful of girls are going on from their Latin and Greek A Levels to study Classics, so our school motto seems as apposite as ever – Ad Lucem!”

Life in the Sixth Form