A Day in the Life of an OHS Sixth Former

Written by Amy (Year 12) on a typical Friday at OHS 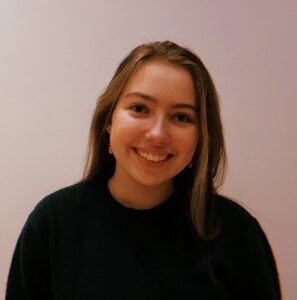 As I think many people can relate to, it has become harder to wake up in the mornings post GHL. I managed to make it on time for school (just!) and my first block of lessons on a Friday is triple English.

One of the most visible changes from Year 11 to the Sixth Form has been our timetable. I used to look at my planner (without which I would never meet any deadlines) and see at least six subjects on one day. Nowadays I usually see three or four which means that we have longer lessons during which, as far as English lessons are concerned, we can really get involved with the set texts. Recently we have been looking at interweaving quotes from critics into our analysis and it has been challenging, but also rewarding to pick apart a critic’s argument to use in our own.

I find that breaks are a really nice time to catch up with people who are not in my lessons and go outside to enjoy the fresh air. Much to some of my friends’ horror I have five periods of Maths on a Friday because I do Further Maths. For me it is something I really enjoy (which is crucial when you spend so much time doing it) and the teachers change (as do the areas of Maths we study) so you don’t feel like you’ve been doing the same subject. In one of the lessons, we looked at applying what we had been learning in class to some real-world problems. Being able to take hypothetical methods and apply them to something that has a direct impact on our lives is incredibly satisfying. 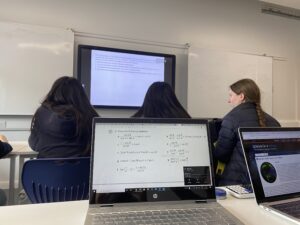 The lessons are spilt up so that a lunch break is in the middle which for me meant a prefect meeting. We were able to discuss ideas about sustainability, mental health, as well as coming up with ideas to engage more with the younger years despite being in COVID-restricted bubbles.

My final two periods of the day were German, which unfortunately meant a test. Our German class, like many A-Level classes, is very small with only four people which means we can get one-on-one help if we have any issues. Sadly the one-on-one help did not apply to the test! We finished the lesson with some homemade baked goods from our German teacher, which were delicious and very much appreciated.

After chatting to people about their weekend plans by the lockers, I headed home, appreciating now being able to get home before it gets dark. I facetimed one of my friends in the evening for almost two hours as we caught up on what had happened in our week and I tried to get an early night but as often happens, ended up going to bed much later than I wanted to.

I hope that everyone has a lovely Easter holiday and gets time to go outside and hopefully enjoy the good weather.