On Wednesday 16th June, Years 10-12 gathered virtually, along with other schools across Oxfordshire, to attend the Undivided conference organised by the diversity prefects, Eleanor and Mika, and run by S3. The conference centred around promoting and advancing discussion and action around racial equality and diversity in the local community.

Our first speakers were Dr Erica Charters and Dr Priya Atwal. Dr Charters is Associate Professor of Global History and the History of Medicine at the University of Oxford, teaching and researching the history of empires, war, and disease, but also coordinating the multi-disciplinary Oxford and Empire project. Dr Atwal is the Community History Fellow at the University of Oxford.  She researches the cultural politics of empire, particularly across Britain and South Asia. Together, they gave a deeply insightful talk on the History of Empires and Empire in Oxford. 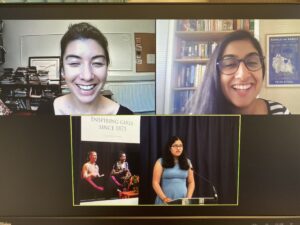 Uncomfortable Oxford continued the discussion of Oxford’s history. They are a social enterprise in the city of Oxford which runs walking tours highlighting stories of inequality, imperialism, race, class, and gender discrimination. Specifically, they focused on addressing problematic statues, such as the Rhodes Statue, and used an interactive programme to bring our virtual audience to the streets of Oxford to look at the statue, discuss its portrayal, and delve into the problematic history behind the man himself.

Daisy Hung was our third speaker. She has been seconded to support the work of the Race Equality Task Force at Oxford this year, helping to create positive change within the University, and aiming to advance racial and social justice. Within the Mathematical, Physical and Life Sciences Division, she leads a team working to embed equality and diversity in all that they do, and cultivate a culture of inclusion and collaboration among departments. Daisy discussed the approach that the Race Equality Task Force was taking to tackle institutional change, which in turn allowed us to reflect on the ways in which schools too can move towards further celebrating diversity. 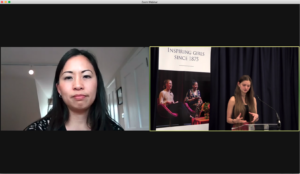 From an institutional aspect to a more systemic one, Nabeela Talib provided an honest discussion on prevent, policing and picket lines. She is a lecturer in Social Work at Oxford Brookes University and an Advocacy and Support worker at Detention Action where she provides support for people in immigration detention. The role of young people in the strive towards equality was at the heart of Nabeela’s message, and her talk finished on a hopeful note, as she looked forward to the future and the ways in which the younger generation is already continuing and expanding the work of generations before.

Our final speaker of the day was Shaista Aziz, whose speech was entitled: ‘How to create an Anti-Rascist Oxford’. Shaista is both a journalist who has been published in a number of international publications including The Guardian, Globe and Mail, Huffington Post and New York Times, and also the founder of Anti-Racist City Oxford. She is a councillor for Oxford City Council and the Council’s first Race and Equalities Champion. Shaista discussed how we, as a community, could move forwards, with an emphasis on the importance of discussion as a tool for  understanding and meaningful change.

We want to thank our speakers once again for their time and wisdom, as well as Dr Karapangioti and Ms Nebesnuick for their help in organising the event, and Mr Hay for running all the sound checks and managing the entire technical side of the conference. We are very grateful for the opportunity that the conference gave us to extend and broaden these important discussions in our school, and look forward to inviting in more speakers in order to continue our endeavours in this field.