In memory of Dr Katharine King

In memory of Oxford High alumna Katharine Rees (Kay to her family and friends), born on 4th August 1931 in Shanghai, China. She married the author Charles King in 1983 and sadly died in New York on 29th February 2016 aged 84.

Her father, Rev. Ronald D Rees, was a Methodist minister who worked in China for twenty five years as a university teacher and secretary of the National Christian Council of China. Her mother, Janet W Rees (nee Edminson), was an active Quaker. Her older sister, Joan or Joanna (married to Karl von Levetzow) died in Toronto in 1992 and her surviving bothers, Tony (married to Priscilla) and Alan (her twin, married to Alison) live in Oxford and Edinburgh respectively.

The family was forced to leave Shanghai in 1937 when the Japanese invaded and settled in Dulwich (London) where Katharine went to the Oakfield Preparatory School. When the 2nd World War broke out in 1939, the family moved again to the safer environment of Oxford. There Katharine attended the Oxford High School for girls until in 1943 she was sent as a boarder to The Mount School in York, the Quaker school where her mother and sister had been before her.

After The Mount, Katharine went to St Hilda’s College, Oxford, from 1950 to 1953 when she obtained a BA Degree in History, later upgraded to a MA Degree in November 1974. She obtained professional qualifications with a Certificate in Psychiatric Social Work at the London School of Economics and Political Science, and a Certificate in Child Psychoanalysis at the Anna Freud Clinic in London. She obtained a PhD in Psychology at the City University, New York, in 1986.

Katharine undertook a number of different assignments in England and abroad in Morocco and Finland. She first went to New York in 1965 and liked it so much she decided to stay to work with the Jewish Board of Guardians and she taught at The New School. After a year she set up her own private practice in the city as a Child Clinical Analyst. She was a member of the Contemporary Freudian Society and a colleague said: “She built up a reputation as a highly skilled and deeply compassionate psychoanalyst. She mentored, taught and guided many generations of students and figured crucially in the founding of the Society’s psychoanalysis program.”

As well as having an apartment in Manhattan, Katharine and Charles had an up-state house in Pine Plains which she loved. She had a wide circle of friends both there and in the city. She also managed to maintain her contacts in the UK, returning regularly for conferences and family occasions. She travelled widely for holidays and notably made a visit with Charlie to China, including to the house at 18 Edinburgh Road, Shanghai, where the family had lived and she was born. Charlie remembers sitting in the garden sandbox.

She celebrated her 80th birthday with a family gathering at St Hilda’s College in Oxford. But towards the end of her life, Katharine suffered increasingly from dementia and from 2013 needed residential care. But there she welcomed visitors and maintained her love of music and poetry right to the end.

Services to celebrate her life and legacy were held in New York on 3rd April and in Oxford on 24th April 2016. 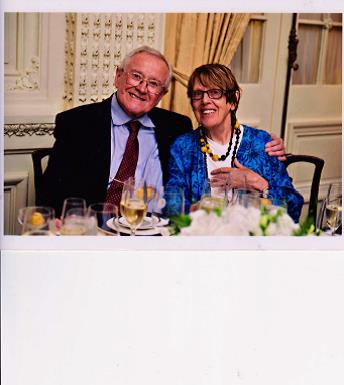 Expectations of All Pupils in Class and During Exams