Miriam was a keen actor during her time at OHS and starred in the first dramatic performance produced in the new hall at Belbroughton Road, playing the role of Gertrude in Hamlet. She left Oxford High School in 1959, but has returned numerous times since, not least to open the Miriam Margolyes Drama Studio, an experience regarding which she commented that, ‘I don’t think I’ve had a happier day.’

On leaving OHS, Miriam attended Newnham College, Cambridge, where she read English and continued acting, appearing in productions by the Cambridge Footlights comedy troupe among others. It was also during this time that Miriam represented Newnham College in the first series of University Challenge, where she attained the dubious honour of being the first person ever to use the ‘F-word’ on British television!

I opened the new buildings and the whole school were there in the auditorium and I gave a speech and I went round the building. It was thrilling, and then I went to see the Miriam Margoyles studio, which is there in my school, and I don’t think I’ve had a happier day. It was absolutely wonderful.

After doing voiceover work and performing in political theatre in the Seventies, Miriam began to take on roles of increasing significance in the Eighties, including a long-standing relationship with Blackadder and a major supporting role in the BBC adaptation of The Life and Loves of a She-Devil. In 1989, Miriam won the 1989 LA Critics’ Circle Award for Best Supporting Actress for her portrayal of Flora Finching in the 1988 film Little Dorrit and, in the same year, she also had a significant theatrical success with her co-written one-woman show, Dickens’ Women, in which she played 23 characters from Dickens’ novels.

In 1994, she won a BAFTA Award for Best Supporting Actress for her role as Mrs Mingott in Martin Scorsese’s The Age of Innocence and subsequently accumulated a string of roles that made her a household name, including her performances in James and the Giant Peach (1996); Baz Luhrmann’s Romeo + Juliet (1996), Babe (1995) and, of course, the Harry Potter series, where she played the Herbology teacher, Professor Sprout. 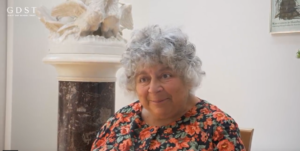 Click on the image to visit our Alumnae pages and hear Miriam talk about happy days at the High School and the teachers who inspired her.

On stage, Miriam was part of the original cast of the London production of the musical Wicked in 2006 and, in 2009, she appeared in a West-End revival of Endgame by Samuel Beckett. Recent appearances on TV have included The Real Marigold Hotel series and, in January 2018, the BBC series Miriam’s Big American Adventure, which highlighted the individual stories of American citizens and the issues facing the nation.

Miriam Margolyes is beloved for the articulacy, directness and fearlessness with which she expresses her passionately held views on everything from LGBTQ rights to her Jewish faith and upbringing. In this sense, she is the archetypal OHS Original.