Oxford High was privileged to host an inspiring talk by Sir Ian McKellen on behalf of Stonewall UK about LGBT+ equality. Led by Equality Prefect Charlotte, and Head Girl Sesha … “The prefect team had the opportunity to spend time with him over lunch and then again before his talk began with our LGBT+ club . He was really responsive and genuinely interested in our school atmosphere, our lives and what we wanted to do once we left OHS. His talk was live-streamed, a first for OHS, to Year 7 in the Lecture Theatre and Year 8 in the Drama Studio, in order to ensure that all Senior School girls and staff could participate, as well as parents and Governors. Sir Ian made sure that he popped into the other venues first to visit the younger years and, after a brief introduction by Dr Sarah Squire, Sir Ian opened by imploring us to revise or “you shall not pass”! ” 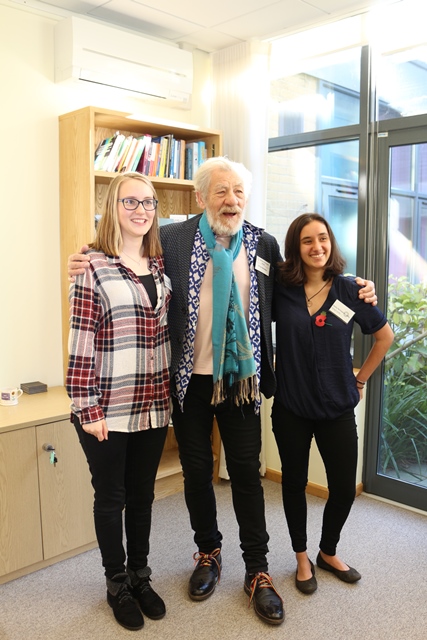 His talk centred upon his experience of coming out and how he believed that honesty is the best policy, he spoke of the struggles that people have experienced in their own journies and the early beginnings of Stonewall. He spoke of his passion that there should be’ no more labels’ for people. He also spoke movingly about the homeless teenagers on our doorsteps who have experienced prejudice when trying to come out to their families. He then held an open Q+A session and was overwhelmed by the wealth of intelligent questions posed by girls of all ages and from our parents and staff too.  The girls responded with a huge standing ovation. Sir Ian ended the afternoon with a fitting and inspirational speech from Shakespeare and then joined our staff for tea where they managed to squeeze in a few selfies and autographs, before he had to depart for the Union in Oxford. We were all left feeling moved and inspired. Thank you to Sir Ian and Stonewall for a truly memorable afternoon.